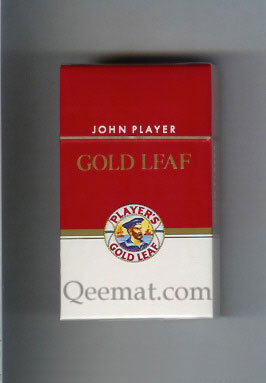 Gold Leaf Review
Primarily known as Player’s, John Player & Sons is the founder of Gold Leaf Cigarette that had started from England in early 18th century. Today the company has become the part of Imperial Tobacco Group. In Pakistan, Gold Leaf cigarette has been ranked one of the top selling and most popular tobacco brands. The largest tobacco corporation of country is Pakistan Tobacco Company (PTC) sells Gold Leaf and many other international cigarettes. Being a subsidiary of British American Tobacco, 63.4 percent of shares are held by the parent company while most of cigarette brands sold by PTC in Pakistan are British. John Player’s Gold Leaf has become a foundation in itself, as it is the only recognizable and typically priced cigarette brands in the country. Recently, Gold Leaf was declared the largest Urban Brand in Pakistan, hammering several products within the F.M.C.G. sector.Gold Leaf where costing within the range of middle class smokers also promises that it contains un-harmful ingredients, which become the most important factor of its popularity among the public. PTC has been sharing the 42 percent market in Pakistan according to a survey conduced in 2009. Pakistan Tobacco has set off a change management program which is called Best 2000. The company is pretty much certain that the product quality is just less than the total quality and this is the quality that they made them successful in. It also derives that knowing your consumers, buyers, stakeholders and dealers. BEST 2000 is helping as the basic component in putting the energies in use of Pakistan Tobacco Company to reach its targets and goals. The mission statement of Gold Leaf cigarette manufacturer PTC is, “Together we will be the best in everything we do. BEST 2000 was launched in 1997. BEST is helping PTC improve its team building”.

More to this, it gives out the ways to consistently recuperate and resolve the virtuous circle that slows down the progress. Furthermore, it helps out the workers and staff to contribute in moving forward the company. The ultimate purpose of Pakistan Tobacco Company is to guarantee that its employees’ lineup is properly streamlined to face upcoming challenges and fully ready to step into the next level. Pakistan Tobacco Company has a paid up capital of Rs. 319.367 million. In late 90s, the organization paid approximately Rs. 9.4 billion to the state economy through duties and taxes. The most popular brands of Pakistan Tobacco Company include John Player Gold Leaf, Dunhill, Benson & Hedges, Wills Kings, Gold Flake and Embassy. Pakistan Tobacco Company expanded its function areas by starting the cooking oil market in the year 1996. What is more, the company plans to discover the export prospects by taking advantage of the present opportunities in Central Asian destinations.